Despite my lack of checking in on them – I have been doing a fair amount of reading lately. Here’s one of the books I read a while ago, but have taken my sweet time getting around to writing about.

This book, also, deserves its own entry — because there’s a bit to say here!

An Extraordinary Union, by Alyssa Cole 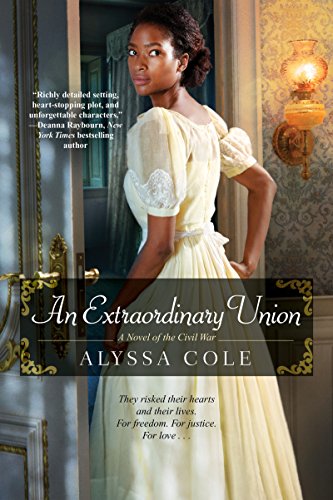 I really loved this book. A lot.

I’ll admit, it took me a few tries to get started – but a friend who I trust told me that it was a great book, so I pushed through. It isn’t unusual, I realized, for me to take a bit to warm up to a book, the introduction that really pulls me in and keeps me from the get-go is rare. Until I started to write about this I hadn’t quite put that together – and now am forcing myself to get through at least the first chapter-and-a-half of a book before I give up on it.

I’ve always been a fan of Historical Fiction, Ann Rinaldi was a go-to for me when I was younger (and still a favorite re-read). But these books pretty much have one thing in common – the main character is white. While many of the ones I read had a female main character, they were almost unilaterally white (as were the authors). On the rare chance there was a main character of color they were likely a slave. Any portrayals of people of color (black, Native American, Hispanic, anything really) in these books were few and often they were in a very marginalized role. One of the exceptions to this that I can think of was Addy, the American Girl who was a slave who ran-away.  Most of her stories revolved around her life in the north.

So I was pretty excited to read a story about a black woman, during the Civil War, who embodied a different role – Elle is a former slave who returns to the south as a spy. She is a vibrant character, and I loved watching her working through different situations – putting her unique talents to work.

There were so many little bits of history throughout the story, told with rich detail it felt very real — and Elle was a very relatable character.

This is also a romance. I struggle with how to write about romance stories, because there are certain expectations some people place on a book when they hear it’s a “romance novel.” The reality is that a well written romance novel doesn’t really need to be graded on a different scale than any other novel (I cringe when I hear “it’s good for a romance novel”) and this is one of those well-written ones. The romance that builds between the characters, while at points kind of predictable (because it is, after all a romance… so I at least know that a romance is going to occur!) was very well crafted. I was ready to yell at the author at one point, because I thought she was going to do something just MEAN to the readers, but she didn’t and I was quite relieved. Yes, that’s vague, but I’m trying to avoid spoilers here!

I’m looking forward to more by this author (including another book in this series), and think it’s likely that An Extraordinary Union will end up being reread.
Reading Challenges: BookRiot’s Read Harder (A Romance Novel By or About a Person of Color); Beaverton Library Booking Ahead (January: A Book Featured on a “Best Books of 2017” List).

I am finding my way on the meandering, twisting path of life, constantly surprised by what’s around the next bend. Working to embrace and face the challenges inherent with following your dreams, and writing the journey. A writer and dreamer, historian and theologian, academic and fantasy-world-creator, genealogist and gluten-free baker, crafter and reader, poet and life-long learner, constantly questioning and occasionally irreverent. Eclectic Alli is my personal blog, with reflections on writing, life, theology, history, or whatever may catch my thoughts. Disparate Threads is a fantasy-fiction serial-blog, I am trying to break out of the traditional book-format mold of storytelling, taking advantage of the blog format to build a world. Everything on Disparate Threads is considered "Draft," and I WANT reader responses and input! Twitter, Tumblr, Facebook and Instagram round out my online presence, and I try to do little bits different with each of them. View all posts by eclecticalli

One thought on “Book Review: An Extraordinary Union by Alyssa Cole”

What do you think? Cancel reply

This site uses Akismet to reduce spam. Learn how your comment data is processed.

Doubling up my volunteering today. First up -Ramona Quimby party!! Love her! @beavertonlib #ramonaquimby #reading
Sunday morning study time before an afternoon of volunteering at the @beavertonlib @insomniacoffee #studytime
The weather is cooperating for some #catio #studytime - Now if #MidnightMonsterCat would stop being a scaredy cat and understand that he can be out here at the SAME time as me...
Took a break from homework and class group meetings to cut the fabric for @rebeccagammons dress for the upcoming #Leapdayfeast with the @oregonregencysociety Excited to get it fitted to her! Maybe I'll have a little time to also add some to my own gown :) #costumetime #regencyfashion
Spotted one of our wild bunnies- #MidnightMonsterCat was intrigued.
Current studying situation... #MidnightMonsterCat #catsofinstagram
%d bloggers like this: